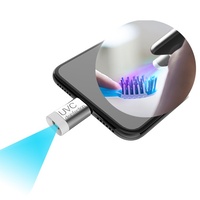 Notify me when back in stock

The 'Mobile UVC Steriliser' is lightweight, portable and is powered by your mobile phone so no need for batteries.  Use it everywhere including on restaurant cutlery, car keys, surfaces, toilets, sinks, taps, door handles, makeup brushes any anything else you can think of.

Ultraviolet Light C (UVC) provides rapid and effective inactivation of microorganisms such as SARS,  Escherichia coli, Staphylococcus aureus and influenza virus. UVC has been in use since 1978 to sterilise hospitals, aeroplanes, offices, and factories.

An article published on bbc.com (27th March 2020) explains the difference between the 3 different UV lights and states that:

“Since the finding in 1978, artificially produced UVC has become a staple method of sterilisation – one used in hospitals, airplanes, offices, and factories every day.”

Researchers are now looking at how UVC affects Covid-19 and while there are no completed studies to date, studies have shown that it can be used against other viruses, such as Sars (see study). The radiation warps the structure of their genetic material and prevents viral particles from making more copies of themselves.

As a result, a concentrated form of UVC is now on the front line in the fight against Covid-19. In China, whole buses are being lit up by the ghostly blue light each night, while squat, UVC-emitting robots have been cleaning floors in hospitals. Banks have even been using the light to disinfect their money."

UVC enables us to provide a healthier environment for our families when 'out and about' and around the home. Warning: ‘UVC exposure to the skin or eyes can cause both short term injury and long term health effects, this may include burns, eye injuries and an increased risk of skin cancer or cataracts’. Keep out of reach of children.

Help other users shop smarter by writing reviews for products you have purchased. More From This Category Add your favourites to cart

Your purchase will be split into 4 payments, payable every 2 weeks

All you need to apply is to have a debit or credit card, to be over 18 years of age, and to be a resident of country offering Afterpay

Late fees and additional eligibility criteria apply. The first payment may be due at the time of purchase
For complete terms visit afterpay.com/terms